Voices from the Field: Doing more with less in Sandoval 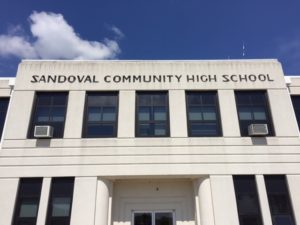 Sandoval CUSD 501 is a school district located about 100 miles south of Springfield in a region long known for its coal mining. Now Sandoval’s mostly known for being a few miles away from Patoka, where the famed Keystone XL pipeline ends after making its way south from Canada. While home to fewer than 500 students, Sandoval is representative of the challenges facing low-income school districts across the state. More than two-thirds of Sandoval students are considered low-income, meaning their families earn below ,955 for a family of four. Just 17% of students in Sandoval schools score at or above expectations on the PARCC exam (34% is the state average) and only 8% score college-ready on the ACT (46% is the state average). Its test scores qualify Sandoval as a low-performing “priority” school district, yet the district doesn’t have the funds needed to retain teachers, offer social supports, or provide art, physical education, AP or foreign language classes—all victims of Illinois’ worst-in-the-nation school funding formula. It’s districts like Sandoval that are also watching closely as Illinois develops a new system for evaluating and intervening in low-performing schools under the new federal Every Student Succeeds Act, the replacement for No Child Left Behind.

Garrison: I’m from a family that relied on free and reduced school lunch myself. I grew up in Vandalia and joined the National Guard to pay for my college. When the school board hired me in Sandoval, I never anticipated school funding would be the barrier to improvement. We’re a priority district with mandated supports from state, which puts us in a cycle of meeting plans and paperwork rather than continuous improvement. The state has increased expectations while we’ve been cutting teachers and staff. What does it say for morale? We expect our staff to wear many hats. We don’t even have the basics of the college pipeline [of providing AP classes and facilitating visits to colleges]. We know we have to take students to colleges and universities. One girl we drove to SIU Edwardsville on her first day because otherwise she wouldn’t have gotten there. We should have a laser-like focus on academics, career and professional development.

Jett: The state used to have a revolving textbook loan program. That was cancelled 10 years ago. We haven’t had new textbooks in a long time. Our social studies and science books are more than 10 years old. The district is currently without a librarian. My wife volunteers as the librarian in the grade school. Ms. Claunch, a high school English teacher, volunteers in high school on weekends, just to give the students a chance to read. Our guidance counselor works in both [grade school and high school buildings] and also is responsible for testing and meeting state mandates. The funds for another counselor were cut.

Jett: Other than maybe a weekend trip to Six Flags, family vacations don’t happen in Sandoval, and school field trips to St. Louis have fallen by the wayside [due to funding]. As a school we haven’t been able to fundraise enough to offer field trips to the zoo and the science center.

Garrison: My goal for staff in the district is to build the skills to work with kids from poverty. Even though we’re small, we can make school the hub of the community and break down barriers between parents and staff. We could have the best teachers in the world, but if we don’t break down barriers I don’t think we’ll move like we need to. When I started at Sandoval, there was a negative tone about being from the community. That’s the mindset of generational poverty. But we’ve built up pride and given students a chance to succeed. There’s a community college just 12 miles away. Often students don’t see a path. They need to build confidence and see that they can succeed.

Sandoval, like many other low-income districts, faces high teacher turnover because it’s unable to afford paying salaries that are competitive with wealthier districts nearby.

Jett: You see schools 10 miles down the road that have [counselors and social workers] and can pay their staff double or triple. It’s disheartening for staff and kids [when teachers leave]. I can’t blame the teachers. We just can’t afford to pay them.

Garrison: Students don’t trust adults and say “You’re an English teacher and I’ve had five of you.” They try to run them out. We don’t have the same turnover in elementary, but in high school they put walls up. They get a connection with a teacher and that one leaves.

Jett: Being a teacher, your goal is a drive for a better life for your kids. Even at an affluent district, you’re not getting rich. You just hope that kids who need help can be pushed over the top and have successful lives.

Garrison: Things are so disjointed from a policy perspective, especially with funding and accountability. When there is inconsistency and not a clear purpose, we’re just perpetuating the cycle. We can give students the chance to make choices [in their career]. We need to get the policies right and not be in this cycle for another 20 years. We’re trying to move from low-performing to middle-of-the-pack to high-performing. Expectations are higher with less money.

Editor’s note: The good news is that state leaders are taking a critical look at how we can solve Illinois’ school funding crisis, with the Illinois School Funding Reform Commission expected to finalize its recommendations by Feb. 1. At the same time, Illinois is seeking to finalize its plan under ESSA, due to the U.S. Department of Education by March 2017.

Get involved by signing up for our e-newsletter, receiving alerts from the Funding Illinois’ Future coalition, or liking us on Facebook and Twitter.