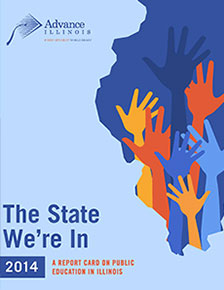 Eight out of every 10 Illinois jobs now require more than a high school diploma, yet only 34 percent of students earn a postsecondary degree. In an era when a postsecondary education is becoming a necessity for securing a living wage position, Illinois has significant work to do in preparing its students to persist through high school and beyond.

Advance Illinois’ biennial report card on the state of public education, The State We’re In, compares Illinois with other states in how well we are educating the next generation from early education to postsecondary attainment. The report defines what it means to be academically prepared at key steps in a student’s education, examines Illinois students’ academic performance from early childhood education to postsecondary, calls attention to lingering racial and economic achievement gaps, and shares information on the school environment and other factors that contribute to student success.